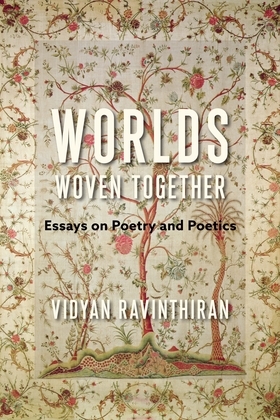 Essays on Poetry and Poetics
by Vidyan Ravinthiran (Author)
Buy for $29.99 Excerpt
Nonfiction Literary essays
warning_amber
One or more licenses for this book have been acquired by your organisation details

Writing about poetry follows models provided either by academic scholarship or literary journalism, each with its pitfalls. The former distances the reader from the poem and effaces the critic’s personality. In literary journalism, the critic is front and center, but the discussion is introductory and prioritizes value judgments. In either case, entrenched practices and patterns of privilege limit one’s perspective. The situation worsens when it comes to minoritized poets and poets from the Global South, where the focus is on restrictive notions of identity: the stylistic innovations of literary works get ousted by prefabricated historical narratives.

In Worlds Woven Together, the critic, poet, and scholar Vidyan Ravinthiran searches for alternatives, pursuing close, imaginative readings of a variety of writers. His essays are open-ended, attentive, and curious, unabashedly passionate and subjective yet keenly analytical and investigative. Discussing neglected authors and those well-known in the West, Ravinthiran sees politics as inseparable from literary form and is fascinated by the relation of the creative consciousness to the violences of history. The book features essays on writers including Mir Taqi Mir, Ana Blandiana, A. K. Ramanujan, Marianne Moore, Eunice de Souza, Czeslaw Milosz, Ted Hughes, Rae Armantrout, Arvind Krishna Mehrotra, Galway Kinnell, Dawn Lundy Martin, and Vahni Capildeo. Revealing serendipitous connections—between poems and cultures, between lines of verse and the lives we lead—Worlds Woven Together is for all readers fascinated by the mechanics and politics of poetry.