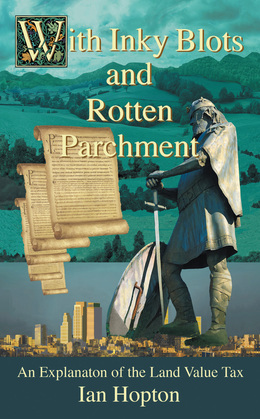 With Inky Blots and Rotten Parchment

An Explanation of the Land Value Tax
by Ian Hopton (Author)
Buy for $6.80 Excerpt
Nonfiction Business & economics Taxation Social science Political science Economic conditions
warning_amber
One or more licenses for this book have been acquired by your organisation details

I believe that in the near future, the issue of taxation will become more widely discussed at all levels of government and this will include the possibility of a land value tax (LVT). At the same time, the majority of ordinary taxpayers, who may be otherwise very well informed, have probably never heard of it.

This book is therefore an educational book aimed at filling this gap in our knowledge. It is aimed at those people who have no particular knowledge of economics or taxation but who wish to know what LVT is and how it works. The book is based on the information and data that I have collected over many years for my website: https://landvaluetaxguide.com

The contemporary formulation of LVT owes its origin in the publication, in 1879, of Progress and Poverty by the American economic philosopher, Henry George. His book gave rise to a worldwide movement that reached its peak with reformist governments in the first decade of the 20th century. LVT thereafter became overshadowed by the preference of governments for the income tax and also by the organised opposition of vested interests, who saw it as a threat to their source of unearned income.

But, in recent years, many economists, academics and politicians have begun to see the failures of the current neoclassical/neoliberal economic system and are seriously reconsidering LVT as an alternative. For a list of LVT supporters over recent years refer to: https://landvaluetaxguide.com/category/supporters/

The book comprises an introduction, thirteen chapters and three appendices with supplementary information. References are collected in several pages of endnotes and the text is fully indexed.

I present the case for taxation in general as a 'good' not the 'necessary evil' that many people appear to believe. But it has to be accepted that there are good and bad taxes - measured in accordance with the degree of benefit or harm they may give rise to in their application. This book is an explanation of why LVT may be seen as a beneficial tax. I suggest that we would better understand taxes if we viewed them more as contributions towards the proper functioning of society.

In the explanation I make use of diagrams, which take the reader step by step through the evolution of a society from simple beginnings to the development of a complex city, how land values arise in this process, and why they become a proper basis for a system of taxation.

I suggest that throughout history there have always been the same three problems that beset the tax collector: identification, measurement and avoidance. The book shows how a land value tax would be effective in resolving these three issues that remain problems to this day.

I examine the issue of private landownership and I suggest that this has historically been the basis of much economic injustice. In England, it began with the Norman conquest and became consolidated and legitimised over the centuries, so that now the concept is virtually sacrosanct.

The title of the book is taken from John of Gaunt's 'sceptre'd isle' speech, in Shakespeare's Richard II, in which he laments the king's selling of land leases to finance his campaign in Ireland.