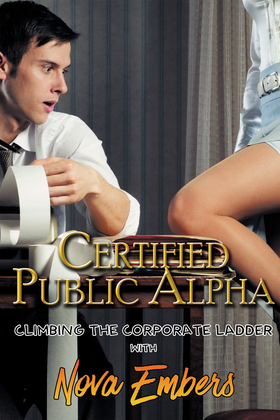 by Nova Embers (Author)
Buy for $2.99 Excerpt
Fiction Erotica Romance Adult
warning_amber
One or more licenses for this book have been acquired by your organisation details

What's the size of your spreadsheet?


The CPA is content living his fantasy life through game play until one day, on a whim, their Dungeon Master asks Erika Prince, the Goddess of Reception, to join their group. Ari has had a crush on Erika since he joined the company and now, she's sitting right next to him dominating Ten Candles.


Ari's lust grows thick as they dive deep into their fantasy roles and when things get hot, he realizes the intelligent and powerful receptionist may actually be interested in him. Not as a character, but in the real world. Ari hopes, by the time they're done messing around in every corner of the office, he'll be more than just cosplaying as a Certified Public Alpha.