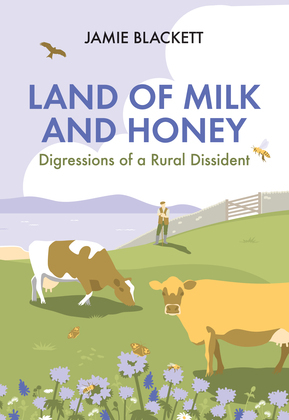 Land of Milk and Honey

Digressions of a Rural Dissident
by Jamie Blackett (Author)
Buy for $21.27 Excerpt
Nonfiction Science and technics Technology & engineering Agronomy, agriculture
warning_amber
One or more licenses for this book have been acquired by your organisation details

Land of Milk and Honey is the long-awaited sequel to Red Rag to a Bull. Author Jamie Blackett finds himself in danger of losing the family estate as his beef business encounters difficulties and the spectre of Brexit bears down on the farming community. Meanwhile he feels under threat from extreme environmentalists attacking the very concept of livestock farming and by resurgent Scottish nationalism threatening the break-up of the United Kingdom.

The book is the honest and forthright account of how he copes with the crisis by following the example of New Zealand farmers in similar circumstances and successfully embracing the new creed of regenerative agriculture and switching the farm into pasture-based dairying. Through Jamie’s struggles the reader comes to understand the crossroads facing the British countryside as it attempts to adapt to free trade after eighty years of agricultural subsidies. We are also guided through the complexities and contradictions in the quest to reach Net Zero carbon and reverse biodiversity loss as he explores the current craze for re-wilding the land and puts some of its ideas into practice for the benefit of wildlife on the estate.

Along the way Jamie becomes an outspoken newspaper columnist and establishes an unlikely political alliance with the maverick socialist George Galloway in an attempt to break the stalemate in Scottish politics and defeat Nicola Sturgeon’s SNP in the Holyrood election.

The book contains humour, vivid passages of nature writing and numerous polemical digressions on a wide range of countryside issues.