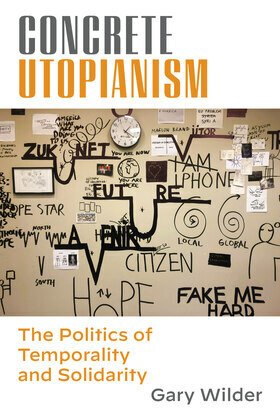 The Politics of Temporality and Solidarity
by Gary Wilder (Author)
Buy for $34.99 Read sample online Download sample
Nonfiction History >1989 Human science Philosophy Political
warning_amber
One or more licenses for this book have been acquired by your organisation details

Never before has it been more important for Left thinking to champion expansive visions for societal transformation. Yet influential currents of critical theory have lost sight of this political imperative. Provincial notions of places, periods, and subjects obstruct our capacity to invent new alignments and envision a world we wish to see. Political imagination is misread as optimism. Utopianism is conflated with idealism. Revolutionary traditions of non-liberal universalism and non-bourgeois humanism are rendered illegible. Negative critique becomes an end in itself. Pessimism is mistaken for radicalism and political fatalism risks winning the day.

In this book, Gary Wilder insists that we place solidarity and temporality at the center of our political thinking. He develops a critique of Left realism, Left culturalism, and Left pessimism from the standpoint of heterodox Marxism and Black radicalism. These traditions offer precious resources to relate cultural singularity and translocal solidarity, political autonomy and worldwide interdependence. They develop modes of immanent critique and forms of poetic knowledge to envision alternative futures that may already dwell within our world: traces of past ways of being, knowing, and relating that persist within an untimely present; or charged residues of unrealized possibilities that were the focus of an earlier generation’s dreams and struggles; or opportunities for dialectical reversals embedded in the contradictory tendencies of the given order.

Concrete Utopianism makes a bold case for embracing what Wilder calls a politics of the possible-impossible. Attentive to the non-identical character of places, periods, and subjects, insisting that axes of political alignment and contestation are neither self-evident nor unchanging, reworking Lenin’s call to “transform the imperial war into a civil war,” he invites Left thinkers see beyond inherited distinctions between here and there, now and then, us and them. Guided by the spirit of Marx’s call for revolutionaries to draw their poetry from a future they cannot fathom yet must nevertheless invent, he calls for practices of anticipation that envision and enact, call for and call forth, seemingly impossible ways of being together. He elaborates a critical orientation that emphasizes the dialectical relations between aesthetics and politics, political imagination and transformative practice, concrete interventions and revolutionary restructuring, past dreams and possible worlds, means of struggle and its ultimate aims. This orientation requires nonrealist epistemologies that do not mistake immediate appearances with the really real. Such epistemologies would allow critics to recognize uncanny and untimely aspects of social life, whether oppressive or potentially emancipatory. They may help actors to render the world subversively uncanny and untimely. They may clear pathways for the kind of critical internationalism and concrete utopianism that Left politics cannot afford to ignore.