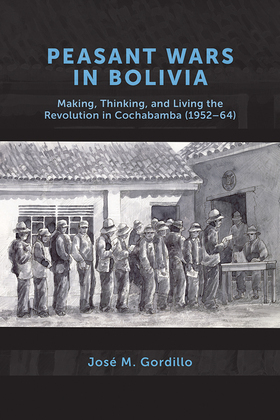 Making, Thinking, and Living the Revolution in Cochabamba, 1952-64
by José M. Gordillo (Author)
Buy for $34.99 Excerpt
Nonfiction History History by country South America Social science Anthropology
warning_amber
One or more licenses for this book have been acquired by your organisation details

Peasant Wars in Bolivia reveals the active political role played by the Cochabamba valley peasants during the 1952-64 revolutionary period in Bolivia from a non-state perspective. Based on contemporary research in social, political, and cultural issues in Latin America it blends sociological and anthropological methods to go beyond recognized contexts of central power and emphasize the revolutionary experience of the peasants themselves.

Drawing on archival research, newspapers, interviews, and a wealth of secondary sources, the book argues that the Cochabamba valley mestizo population of rural workers forged their own collective “campesino” identity alongside their revolutionary struggles against regional elites and the state. This newly created identity allowed the campesinos entry into the Bolivian national political arena as dynamic actors, transformed their subjectivities, and changed the existing political culture of Bolivia. It goes on to analyze the historical status of the revolution and the role of the mestizo peasantry within it in the context of academic and political debates of the first two decades of the twenty-first century.

Crossing established borders between history, anthropology, and sociology, Peasant Wars in Bolivia is a fascinating, interdisciplinary exploration of the revolutionary campesinos of the Cochabamba valley, of Bolivia’s nationalist revolution, and of the ways it has been interpreted and understood within Bolivian politics and culture.