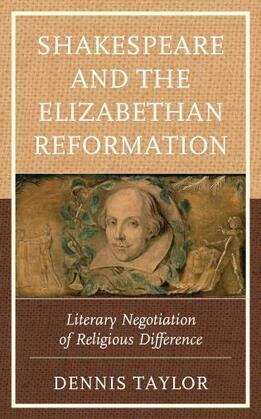 Shakespeare and the Elizabethan Reformation

Literary Negotiation of Religious Difference
by Dennis Taylor (Author)
Buy for $50.00 Excerpt
Nonfiction Literary essays
warning_amber
One or more licenses for this book have been acquired by your organisation details

Shakespeare and the Elizabethan Reformation: Literary Negotiation of Religious Difference explores how Shakespeare’s plays dramatize key issues of the Elizabethan Reformation, the conflict between the sacred, the critical, and the disenchanted; alternatively, the Catholic, the Protestant, and the secular. Each play imagines their reconciliation or the failure of reconcilation. The Catholic sacred is shadowed by its degeneration into superstition, Protestant critique by its unintended (fissaparous) consequences, the secular ordinary by stark disenchantment. Shakespeare shows how all three perspectives are needed if society is to face its intractable problems, thus providing a powerful model for our own ecumenical dialogues. Shakespeare begins with history plays contrasting the saintly but impractical King Henry VI, whose assassination is the ”primal crime,” with the pragmatic and secular Henry IV, until imagining in the later 1590’s how Hal can reconnect with sacred sources. At the same time in his comedies, Shakespeare imagines cooperative ways of resolving the national ”comedy of errors,” of sorting out erotic and marital and contemplative confusions by applying his triple lens. His late Elizabethan comedies achieve a polished balance of wit and devotion, ordinary and the sacred, old and new orders. Hamlet is Shakespeare’s ultimate Elizabethan consideration of these issues, its so-called lack of objective correlation a response to the unsorted trauma of the Reformation.