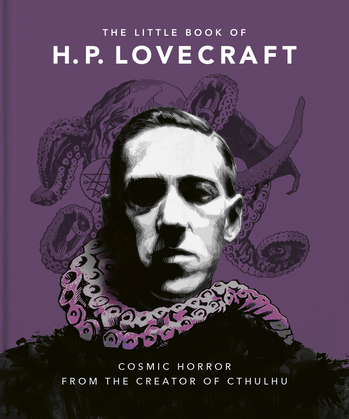 The Little Book of HP Lovecraft

Wit & Wisdom from the Creator of Cthulhu
by Orange Hippo! (Author)
Buy for $3.99
Nonfiction Biography & autobiography Literary Fiction Occult & supernatural Supernatural creatures Ghost Horror Romance Gothic
warning_amber
One or more licenses for this book have been acquired by your organisation details

Howard Phillips Lovecraft had a short life, and he died of cancer in 1936 at the age of 46. But in that relatively short time he had a significant, varied and outstanding output, and although he was not a well-known writer during the time he lived, he has since been hailed as one of the great supernatural fiction writers. Although a huge influence on many writers since his death, and now someone with significant book sales every year, Lovecraft never managed to make a living from writing during his lifetime.

Lovecraft spent much time battling various physical and mental issues, but he was able to form bonds and relationships with key people in his life, some of which influenced his thinking and his work. These included his mother, grandfather, aunt, wife and famous figures from the time including Harry Houdini and Robert E Howard; comments from many are included.

Lovecraft's sensitivity comes through in his writing, and this book also contains numerous quotes from his famous fictional works. Samples from his poems, letters and other writings serve to paint a full portrait of this master of his chosen genre, horror, but who also contributed significantly to science fiction and fantasy; he truly possessed outstanding talent, as celebrated inside.

SAMPLE QUOTE:
'The most merciful thing in the world, I think, is the inability of the human mind to correlate all its contents.' - Francis Wayland Thurston sets the scene for indescribable horror in The Call of Cthulhu, HP Lovecraft, 1926.

SAMPLE FACT:
HP Lovecraft's work was the inspiration behind Arkham Asylum (Batman), Black Sabbath's album Behind the Wall of Sleep and The Book of the Dead from the Evil Dead movies.