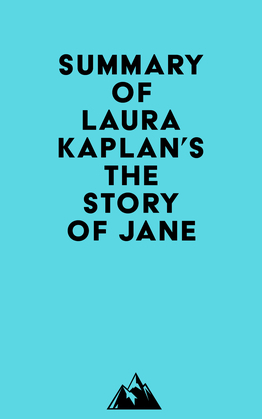 Summary of Laura Kaplan's The Story of Jane

#1 The first voice Jenny heard after the anesthetic wore off was the surgeon’s. The sterilization procedure was a success, and you’re eight weeks pregnant. Jenny was twenty-six, the mother of two young children, and had been suffering from lymphatic cancer, Hodgkin’s disease, for the past two years.

#3 Jenny had been an advocate of women’s rights for most of her adult life. She was raised on the stories of her great-aunt Lillian, a suffragette, who had once chained herself to the gates of the White House. She was active on civil liberties and civil rights issues in college.

#4 In 1965, women in the Movement began raising the issue of women’s second-class status in the Movement and in society in general. By the fall of 1967, radical women realized they needed to form their own movement.