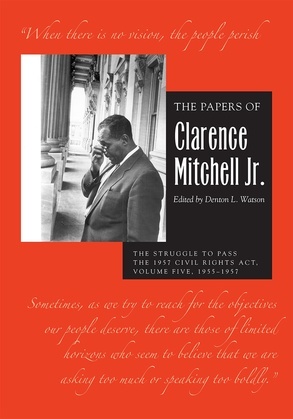 Volume V of The Papers of Clarence Mitchell Jr. records the successful effort to pass the 1957 Civil Rights Act: the first federal civil rights legislation since 1875.

Prior to the US Supreme Court’s landmark 1954 decision in Brown v. Board of Education, the NAACP had faced an impenetrable wall of opposition from southerners in Congress. Basing their assertions on the court’s 1896 “separate but equal” decision in Plessy v. Ferguson, legislators from the South maintained that their Jim Crow system was nondiscriminatory and thus constitutional. In their view, further civil rights laws were unnecessary. In ruling that legally mandated segregation of public schools was unconstitutional, the Brown decision demolished the southerners’ argument. Mitchell then launched the decisive stage of the struggle to pass modern civil rights laws.

The passage of the Civil Rights Act of 1957 was the first comprehensive lobbying campaign by an organization dedicated to that purpose since Reconstruction. Coming on the heels of the Brown decision, the 1957 law was a turning point in the struggle to accord Black citizens full equality under the Constitution. The act’s passage, however, was nearly derailed in the Senate by southern opposition and Senator Strom Thurmond’s record-setting filibuster, which lasted more than twenty-four hours. Congress later weakened several provisions of the act but—crucially—it broke a psychological barrier to the legislative enactment of such measures.

The Papers of Clarence Mitchell Jr. is a detailed record of the NAACP leader’s success in bringing the legislative branch together with the judicial and executive branches to provide civil rights protections during the twentieth century.