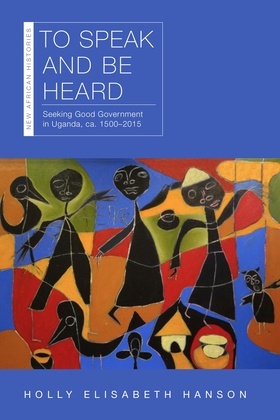 To Speak and Be Heard

Seeking Good Government in Uganda, ca. 1500–2015
by Holly Elisabeth Hanson (Author)
Buy for $34.99 Excerpt
Nonfiction History History by country Africa East
warning_amber
One or more licenses for this book have been acquired by your organisation details

A history of a political practice through which East Africans have sought to create calm, harmonious polities for five hundred years.

“To speak and be heard” is a uniquely Ugandan approach to government that aligns power with groups of people that actively demonstrate their assent both through their physical presence and through essential gifts of goods and labor. In contrast to a parliamentary democracy, the Ugandan system requires a level of active engagement much higher than simply casting a vote in periodic elections.

These political strategies—assembly, assent, and powerful gifts—can be traced from before the emergence of kingship in East Africa (ca. 1500) through enslavement, colonial intervention, and anticolonial protest. They appear in the violence of the Idi Amin years and are present, sometimes in dysfunctional ways, in postcolonial politics. Ugandans insisted on the necessity of multiple voices contributing to and affirming authority, and citizens continued to believe in those principles even when colonial interference made good governance through building relationships almost impossible.

Through meticulous research, Holly Hanson tells a history of the region that differs from commonly accepted views. In contrast to the well-established perception that colonial manipulation of Uganda’s tribes made state failure inevitable, Hanson argues that postcolonial Ugandans had the capacity to launch a united, functional nation-state and could have done so if leaders in Buganda, Britain, and Uganda’s first governments had made different choices.