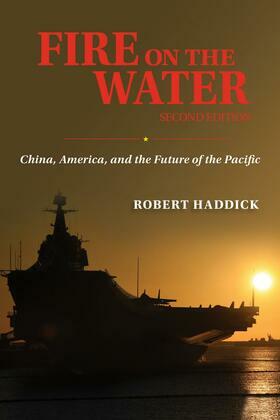 Fire on the Water

China, America, and the Future of the Pacific
by Robert Haddick (Author)
Buy for $39.95 Excerpt
Nonfiction History History by country United States Other Military
warning_amber
One or more licenses for this book have been acquired by your organisation details

When Robert Haddick wrote Fire on the Water, first published in 2014, most policy experts and the public underestimated the threat China’s military modernization posed to the U.S. strategic position in the Indo-Pacific region. Today, the rapid Chinese military buildup has many policy experts wondering whether the United States and its allies can maintain conventional military deterrence in the region, and the topic is central to defense planning in the United States.

In this new edition, Haddick argues that the United States and its allies can sustain conventional deterrence in the face of China’s military buildup. However, doing so will require U.S. policymakers and planners to overcome institutional and cultural barriers to reforms necessary to implement a new strategy for the region.

Fire on the Water, Second Edition also presents the sources of conflict in Asia and explains why America’s best option is to maintain its active forward presence in the region. Haddick relates the history of America’s military presence in the Indo-Pacific and shows why that presence is now vulnerable. The author details China’s military modernization program, how it is shrewdly exploiting the military-technical revolution, and why it now poses a grave threat to U.S. and allied interests. He considers the U.S. responses to China’s military modernization over the past decade and discusses why these responses fall short of a convincing competitive strategy.

Detailing a new approach for sustaining conventional deterrence in the Indo-Pacific region, the author discusses the principles of strategy as they apply to the problems the United States faces in the region. He explains the critical role of aerospace power in the region and argues that the United States should urgently refashion its aerospace concepts if it is to deter aggression, focusing on Taiwan, the most difficult case. Haddick illustrates how the military-technical revolution has drastically changed the potential of naval forces in the Indo-Pacific region and why U.S. policymakers and planners need to adjust their expectations and planning for naval forces. Finally, he elucidates lessons U.S. policymakers can apply from past great-power competitions, examines long-term trends affecting the current competition, summarizes a new U.S. strategic approach to the region, describes how U.S. policymakers can overcome institutional barriers that stand in the way of a better strategy, and explains why U.S. policymakers and the public should have confidence about sustaining deterrence and peace in the region over the long term.