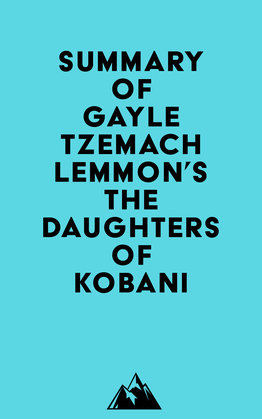 Summary of Gayle Tzemach Lemmon's The Daughters of Kobani

by   Everest Media (Author)
Buy for $2.99 Excerpt
Nonfiction History History by country Middle East
warning_amber
One or more licenses for this book have been acquired by your organisation details

#1 Azeema was a sniper, and her life and the lives of her teammates hinged on her ability to bide her time and know just the right moment to shoot. She was under siege in Kobani, a Kurdish town near the Syrian-Turkish border.

#2 The Kurds are a large ethnic minority in Syria, and they have been seeking their own land since the Treaty of Sèvres promised them a state in 1920, but Turkey's first president, Mustafa Kemal Atatürk, rejected the treaty.

#3 The 2004 Kurdish uprising in Syria was a result of the Iraqi Kurdistan region gaining more rights as a result of the U. S. ousting of Saddam Hussein. It demonstrated the will of young Syrian Kurds to defy their elders and go out into the streets, despite the dangers and risk of jail.

#4 The Kurdish people in Syria were able to build up a political opposition group, the Democratic Union Party, and recruit members. They were still illegal in Syria, but they worked in secret to spread their ideas and gather followers.