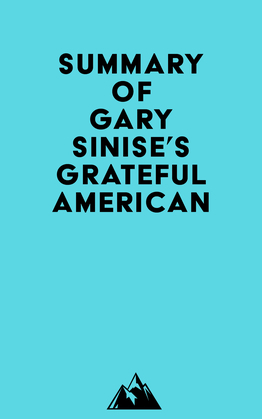 by   Everest Media (Author)
Buy for $2.99 Excerpt
Nonfiction Biography & autobiography Entertainment & performing arts
warning_amber
One or more licenses for this book have been acquired by your organisation details

#1 Vito Sinisi, my great-grandfather, traveled to Brazil and then to America in 1891. He had nine children with his wife Anna Maria Fusco, but only two of them were born in America. Vito worked in Chicago as a crossing watchman and for the city of Blue Island on a horse-drawn garbage wagon before retiring in 1940.

#2 My grandfather, Donato Louis Sinise, was called Daniel by everyone. He was one of Vito’s kids born in Chicago. Grandpa Dan arrived in 1900 and quickly grew into a hardworking kid who sold newspapers and peddled bread. He left home at fifteen to work in a glass factory.

#3 My grandfather and uncle served in World War II, and my father served in the Korean War. They never spoke much about their military days, but I did talk to my uncle Jack about his service in World War II before his passing in 2014.

#4 My father, Gary, was a film editor who worked for other people as a film editor before launching his own company, Cam-Edit, when he was about thirty years old. He was the first person in Chicago to have his own editing business.