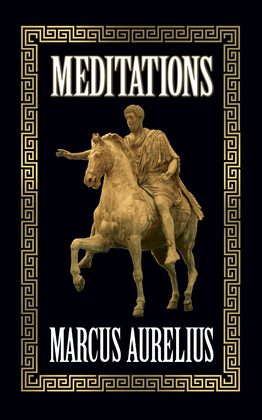 MEDITATIONS IS AS RELEVANT TO OUR LIVES TODAY AS IT WAS WHEN IT WAS FIRST WRITTEN ALMOST 2,000 YEARS AGO.

Meditations is an extraordinary series of unabridged private reflections of Marcus Aurelius (AD 121-180) on how one is to exist in a world of chaos. Emperor of Rome from 169 to180 AD and considered by Machiavelli as the last of the “Five Good Emperors,” Aurelius was the most powerful and influential man in the Western world at the time and is known as one of the most important of the Stoic philosophers, praised for their wisdom, insight and guidance by leaders and great thinkers alike. The “Meditations” are perhaps the most important source of our modern understanding of their philosophy of which he was the last distinguished representative.

The twelve books in Meditations chronicle different stages of Aurelius’ life and ideas. Never intended for publication, they are the personal notes of a man who studied his unique position of power as an emperor while trying to uphold an inner balance in the chaotic world around him. Intended for his own guidance and self-improvement, they are simple in style and sincere in tone.

Although he ruled during an age of relative peace and stability throughout the empire, his reign was marked by military conflict and a devastating plague, killing more than five million people. Aurelius’ writings present an unprecedented look into the “spiritual exercises” which helped him through his tumultuous life and strengthened his patience, empathy, generosity, self-knowledge and emotional health.