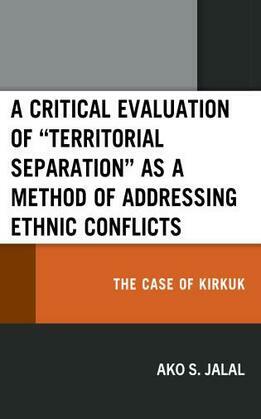 The Case of Kirkuk
by Ako S. Jalal (Author)
Buy for $45.00 Excerpt
Nonfiction Social science Political science Comparatif International relations Diplomacy
warning_amber
One or more licenses for this book have been acquired by your organisation details

A Critical Evaluation of “Territorial Separation” as a Method of Addressing Ethnic Conflicts focuses on the reasons that have contributed to ethnic conflicts in Kirkuk. In the book, Ako S. Jalal addresses geographic, economic, political, and social factors., He argues in the outcome of the research that the previous applied methods like power sharing and Constitution rewriting could not address ethnic conflicts effectively. Finally, Jalal proves through the research hypothesis that the basic method to address ethnic conflicts in Kirkuk is territorial separation.