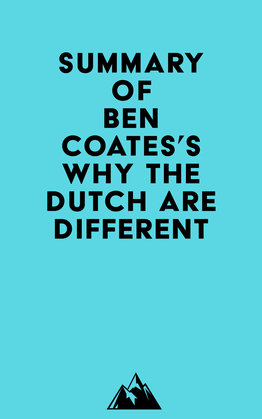 Summary of Ben Coates's Why the Dutch are Different

by   Everest Media (Author)
Buy for $3.99 Excerpt
Nonfiction Social science Anthropology
warning_amber
One or more licenses for this book have been acquired by your organisation details

#1 The Netherlands was the most logical place to build an ark. With more than a quarter of the country lying below mean sea level, canals, rivers, and lakes were almost as common as trees.

#2 The Netherlands is a country that was built on land that was reclaimed from the sea. The country is known for its flatness and its windmills, which were used to pump fields dry. The Dutch also have a deep-seated belief in the need for hard work and order, equality, and cooperation.

#3 The Ark in the Netherlands is a half-size replica of Noah’s Ark that was built in 2005. It was built by a well-off building contractor, and it cost well over a million euros to build. It has taken passengers on a tour of London during the 2012 Olympic Games, but British authorities have refused it permission to visit because they are worried about a fire hazard.

#4 I visited the Noah’s Ark attraction in Dordrecht, which was similar to the one in Zoetermeer. I had an hour to spare before the ferry departure, so I explored Dordrecht.