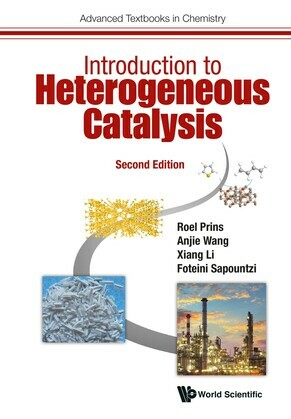 Catalysis is a multidisciplinary subject. This book introduces the chemical, materials, and engineering principles of catalysis so that both MSc and PhD students with a basic but not extensive knowledge of chemistry and physics and those with a basic understanding of chemical engineering can learn more about catalysis. Examples are taken from catalytic reactions and catalysts used in the energy, petroleum, and base-chemicals industry.

The second edition differs from the first edition in the way basic topics are integrated with catalytic applications. The authors introduce two new chapters: 'Cleaning of Fuels by Hydrotreating' and 'Electrocatalysis'. Hydrotreating is a very important industrial process and offers the opportunity to discuss metal sulfide catalysts. Electrocatalysis gains more and more attention because it can be used to minimize the anthropogenic CO₂ emissions. Solar, wind, and hydroelectricity can drive water electrolysis and CO₂ electroreduction and, therefore, excess renewable electricity can be stored in chemicals.

Introduction to Heterogeneous Catalysis (Second Edition) is intended for a one-semester course for master and PhD students who want to learn more about the principles of catalysis. This must-read textbook will enable students to read catalysis literature without much difficulty and presents not only the basic concepts of catalysis but integrates the chemical, materials, and engineering aspects of catalysis with industry examples.

Readership: Meant for a one-semester course for chemistry, physics, materials science, and chemical engineering students with no former knowledge of catalysis. The course can be given in the first year of a master's class or in graduate study. It can also be used by scientists entering industries that deal with catalysis.

Reviews of the First Edition:'With its straightforward presentation, this book is indispensable for everybody who applies and researches heterogeneous catalysis.' - Yong Lu, East China Normal University, China

'The book is a very effective tool for beginners and will be a valuable guide to cross the fascinating world of heterogeneous catalysis.' - Dr Giuseppe Bellussi, Senior Vice President ET-DR&D, Eni S.p.A., Italy

'The book is very nicely illustrated with diagrams and figures, many that are unique in their presentation, and the text is punctuated by photographs of famous historical figures. There are also problems at the back of each chapter which are useful and, in many cases, thought-provoking. This is a must-have book in the personal library of people interested in catalysis.' - Professor S Ted Oyama, The University of Tokyo, Japan & Virginia Tech, USA

'Heterogeneous catalysis is highly related to the industrial production of fuels, petrochemicals, agrochemicals, and fine chemicals. This book highlights the fundamental aspects and basic concepts of heterogeneous catalysis with many examples of industrial applications, providing a complete introduction to the principles behind catalysis. This book is well designed to provide supplementary knowledge for both the students in chemical engineering, who often have only a limited knowledge of chemistry, and those in chemistry and physics, who have not systematically studied the engineering-oriented courses. The representative types of catalysis and industrial examples are carefully selected to enable the readers to grasp the essence of heterogeneous catalysis and the importance of related engineering.' - Distinguished Professor Feng-Shou Xiao, Zhejiang University, China

'I would definitely recommend this book to students who have newly been introduced to the heterogeneous catalyst applications in industry. It also serves as an academic resource for experienced scientists and engineers to have a better understanding of the current trend in heterogeneous catalysis. This will help the professionals to think out of the box and think ahead.' - Hong Nie, Vice President, Research Institute of Petroleum Processing, SINOPEC, China