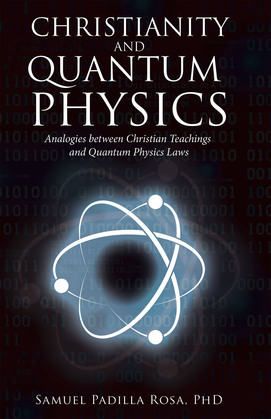 Analogies Between Christian Teachings and Quantum Physics Laws
by Samuel Padilla Rosa PhD (Author)
Buy for $3.99 Excerpt
Nonfiction Religion Religion and society Christianity
warning_amber
One or more licenses for this book have been acquired by your organisation details

Technological achievements have come at a dizzying pace over the past fifty years, with many innovations seeming like science fiction.

Advancements in electricity, television, fiber optics, computers, the internet, and more have become a necessity for most of us. Looking back a bit further, we even put a man on the moon July 20, 1969, with much of the world watching Neil Armstrong step on its surface and proclaim,

“That’s one small step for man. One giant leap for mankind.”

In this book, the author examines the foundations of physics and its connection with faith. Topics include:

· The Higgs Boson particle, also called “the particle of God.” Proposed in 1964 by a British physicist of the same name, it forms the basis of the standard model of physics.

· Similarities between the Christian religion and scientific teachings in light of new interdisciplinary scientific discoveries.

· The relationship between biological processes and spiritual processes that give humans their unique position among all of creation’s species.

Join the author as he examines Christianity in the context of all we know about quantum physics, making the case that recent discoveries should only bolster our faith in the divine.