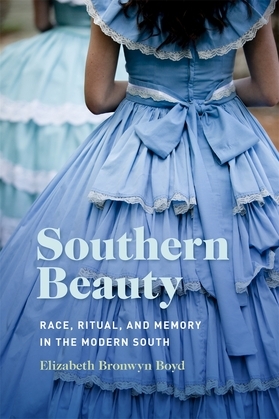 Southern Beauty explains a curiosity: why a feminine ideal rooted in the nineteenth century continues to enjoy currency well into the twenty-first. Elizabeth Bronwyn Boyd examines how the continuation of certain gender rituals in the American South has served to perpetuate racism, sexism, and classism.

In a trio of popular gender rituals—sorority rush, beauty pageants, and the Confederate Pageant of the Natchez (Mississippi) Pilgrimage—young white southern women have readily ditched contemporary modes of dress and comportment for performances of purity, gentility, and deference. Clearly, the ability to “do” white southern womanhood, convincingly and on cue, has remained a valued performance. But why?

Based on ethnographic research and more than sixty taped interviews, Southern Beauty goes behind the scenes of the three rituals to explore the motivations and rewards associated with participation. The picture that Boyd paints is not pretty: it is one of southern beauties securing status and sustaining segregation by making nostalgic gestures to the southern past. Boyd also maintains that the audiences for these rituals and pageants have been complicit, unwilling to acknowledge the beauties’ racial work or their investment in it.

With its focus on performance, Southern Beauty moves beyond representations to show how femininity in motion—stylized and predictable but ephemeral—has succeeded as an enduring emblem, where other symbols faltered, by failing to draw scrutiny. Continuing to make the moves of region and race even as many Confederate symbols have been retired, the southern beauty has persisted, maintaining power and privilege through consistent performance.