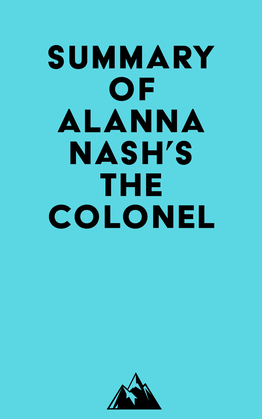 Summary of Alanna Nash's The Colonel

#1 The town of Breda, Holland, is a picture postcard of European charm and character. The van Gend en Loos building, which houses an upscale menswear shop, was originally built as a strategic fortress in the fourteenth century.

#2 The van Kuijk family could be traced back to the Middle Ages, when they were a wealthy, aristocratic family that ruled the small town of Hoogstraten. When the region split in two, the southern part was assimilated into Belgium, while the van Kuijks fled to the town of Breda.

#3 The van Kuijks were a family of travelers. They sold and traded household goods from their barge to other travelers on the water. They couldn’t ignore their greater wanderlust, and they preferred the itinerant life.

#4 Dries was a Ponsie, and he had the Ponsie sense of humor, playfulness, and appreciation of fun. He was also known as the family sleepwalker, as he would wander the streets at night. He had a difficult time taking orders from anyone.