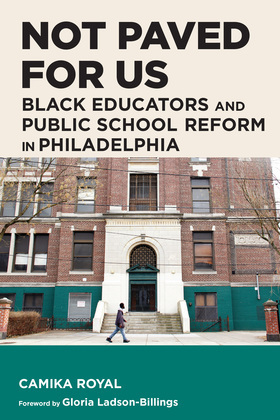 Not Paved for Us

Black Educators and Public School Reform in Philadelphia
by Camika Royal (Author)
Buy for $36.00 Excerpt
Nonfiction Education and study aids Pedagogy
warning_amber
One or more licenses for this book have been acquired by your organisation details

Not Paved for Us chronicles a fifty-year period in Philadelphia education, and offers a critical look at how school reform efforts do and do not transform outcomes for Black students and educators.

This illuminating book offers an extensive, expert analysis of a school system that bears the legacy, hallmarks, and consequences that lie at the intersection of race and education. Urban education scholar Camika Royal deftly analyzes decades of efforts aimed at improving school performance within the School District of Philadelphia (SDP), in a brisk survey spanning every SDP superintendency from the 1960s through 2017.

Royal interrogates the history of education and educational reforms, recounting city, state, and federal interventions. She covers SDP's connections with the Common School Movement and the advent of the Philadelphia Freedom Schools, and she addresses federal policy shifts, from school desegregation to the No Child Left Behind and Every Student Succeeds Acts. Her survey provides sociopolitical context and rich groundwork for a nuanced examination of why many large urban districts struggle to implement reforms with fidelity and in ways that advance Black students academically and holistically.

In a bracing critique, Royal bears witness to the ways in which positive public school reform has been obstructed: through racism and racial capitalism, but also via liberal ideals, neoliberal practices, and austerity tactics. Royal shows how, despite the well-intended actions of larger entities, the weight of school reform, here as in other large urban districts, has been borne by educators striving to meet the extensive needs of their students, families, and communities with only the slightest material, financial, and human resources. She draws on the experiences of Black educators and community members and documents their contributions.

Not Paved for Us highlights the experiences of Black educators as they navigate the racial and cultural politics of urban school reform. Ultimately, Royal names, dissects, and challenges the presence of racism in school reform policies and practices while calling for an antiracist future.