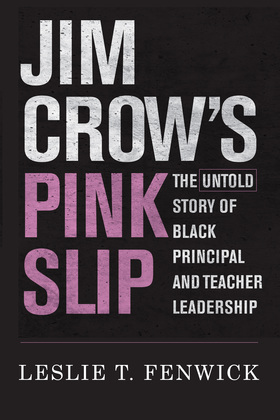 The Untold Story of Black Principal and Teacher Leadership
by Leslie T. Fenwick (Author)
Buy for $34.00 Excerpt
Nonfiction Education and study aids Pedagogy Essays
warning_amber
One or more licenses for this book have been acquired by your organisation details

Jim Crow’s Pink Slip exposes the decades-long repercussions of a too-little-known result of resistance to the Brown v. Board of Education decision: the systematic dismissal of Black educators from public schools.

In 1954, the Supreme Court’s Brown decision ended segregated schooling in the United States, but regrettably, as documented in congressional testimony and transcripts, it also ended the careers of a generation of highly qualified and credentialed Black teachers and principals. In the Deep South and northern border states over the decades following Brown, Black schools were illegally closed and Black educators were displaced en masse. As educational policy and leadership expert Leslie T. Fenwick deftly demonstrates, the effects of these changes stand contrary to the democratic ideals of an integrated society and equal educational opportunity for all students.

Jim Crow’s Pink Slip provides a trenchant account of how tremendous the loss to the US educational system was and continues to be. Despite efforts of the NAACP and other civil rights organizations, congressional hearings during the Nixon administration, and antiracist activism of the 21st century, the problems fomented after Brown persist. The book draws the line from the past injustices to problems that the educational system grapples with today: not simply the underrepresentation of Black teachers and principals, but also salary reductions, teacher shortages, and systemic inequality.

By engaging with the complicated legacy of the Brown decision, Fenwick illuminates a crucial chapter in education history. She also offers policy prescriptions aimed at correcting the course of US education, supporting educators, and improving workforce quality and diversity.