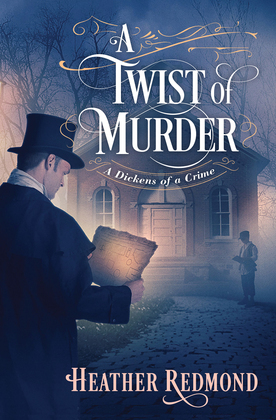 A Twist of Murder

by Heather Redmond (Author)
Buy for $22.95 Read sample online Download sample
Fiction Mystery & detective Historical
warning_amber
One or more licenses for this book have been acquired by your organisation details

The acclaimed historical mystery series A Dickens of a Crime continues with a reimagining of Charles Dickens’s classic Oliver Twist, filled with murder, mystery, and a young Dickens himself as the amateur sleuth. In other words, "Please, can we have some more!"

Harrow-on-the-Hill, March 1836: In a sense, orphans Ollie, John, and Arthur have always been treasure hunters. The mudlarks have gone from a hardscrabble life scavenging the banks of the Thames for bits and bobs to becoming students at a boarding school outside of London, thanks to the kind and generous intercession of Charles Dickens. But now they’re missing—as is, apparently, a treasure map.

When Charles arrives at the school, he’s hit with another twist—the servant girl who was allegedly in possession of the map has been strangled in the icehouse. Unbeknownst to them on their spirited adventure, his young friends may be in mortal danger. Now Charles and his fiancée Kate Hogarth, who has come to join him in the search for the runaways, must artfully dodge false leads and red herrings to find the boys and the map—before X marks the spot of their graves . . .