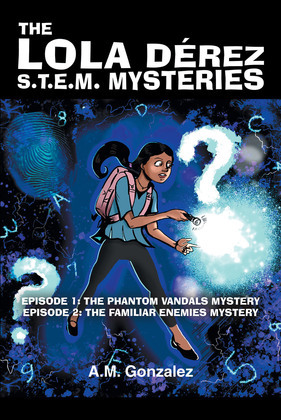 Episode 2: The Familiar Enemies Mystery
by Gonzalez,A.M. (Author)
Buy for $9.99 Excerpt
Fiction Juvenile & young adult Detective & thrillers
warning_amber
One or more licenses for this book have been acquired by your organisation details

About the Book Series

This book series for teens and tweens is designed to raise awareness of the physical and chemical world around them and the direct connections they have to it. Presented in a fictional story format, concepts that seem boring and irrelevant to young readers are presented in the familiar context of a fictional teenager's life. More topics and themes can be presented in this format than there are elements in the periodic table!

About the Phantom Vandals Mystery

A visit to the high school that Lola Derez and her friend Zendeeka will be attending in the fall turns into a nightmare. Lola catches two intruders vandalizing campus--but she is the only witness! When she becomes the prime suspect to the crime, she vows to prove her innocence using logic and some chemistry she learned at home. But can Lola be resourceful and bold enough to convince her family and friends--and the police--that she didn't do it?

About the Friendly Enemies Mystery

The start of summer is a time of celebration for Lola Derez and her family. This year is extra special: her grandparents are making a rare visit. But an unexplained accident at the Recycling Center where Lola's dad works sparks a drastic change in some familiar people. They set in motion a string of events that puts an entire neighborhood in danger--including Lola and her family! Curiosity and quick thinking help her discover a plot of revenge. But can Lola act in time to stop a sinister attack on innocent people?