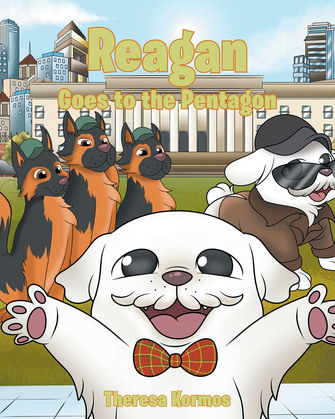 Reagan Goes to the Pentagon

Reagan Goes to the Pentagon Page 6 of 7

Has anyone ever said that you could not do something because of being either too young or too small? That is exactly what happened to Reagan!

Reagan is a little white fluffy dog who wants to serve his country. He talks with his dog friends, and their advice sends Reagan on an adventure! Sometimes he is told that he cannot do the job, but Reagan is spunky, and eventually his dream comes true.

This story is about a real dog named Reagan. It is partly true because Reagan's human mother was a nurse and Reagan did accompany her to the outpatient clinic where he helped brighten the day of many patients. His human father was assigned to the Pentagon as a member of the United States Air Force. It is true that Reagan did fly on an airplane with his human mother into the Reagan Airport in Washington, DC.