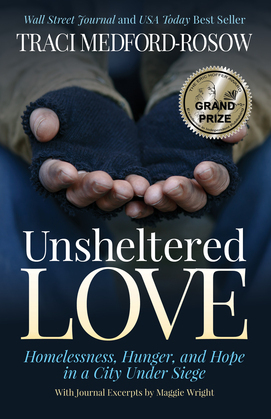 Homelessness, Hunger and Hope in a City under Siege
by Traci Medford-Rosow (Author)
Buy for $9.99 Excerpt
Nonfiction Social science Political science Social policy Social work Sociology
warning_amber
One or more licenses for this book have been acquired by your organisation details

A story about hope and how every one of us can make a difference.

Unsheltered Love is a first-hand reported account of how the pandemic greatly exacerbated an already dire homelessness situation in New York City.

In March 2020, the usually crowded streets of Midtown Manhattan were empty, stores were closing, people were afraid to go out. But homeless people were still on the streets, cold and very hungry, and much less able to panhandle in the deserted city.

Unable to ignore their suffering, the author and her husband started walking the empty streets in their neighborhood, handing out food to the men and women they met. As they showed up, trust replaced the fear and suspicion that had existed within them, as well as within the homeless people they befriended. They listened as the homeless revealed their daily struggles living on the streets, as well as the details that had led to their homelessness.

Unsheltered Love also provides an in depth look at one of the ten characters in the story—a homeless woman named Maggie Wright who adds her perspective to the narrative. Following each chapter is a journal entry written by Maggie—her viewpoint of the same events in the story, as well as an inside look at her personal journey into homelessness and her rise out of it. Her entries provide a look into the psychology of homelessness, what can lead a person to this fate, and more importantly, bind them to it.