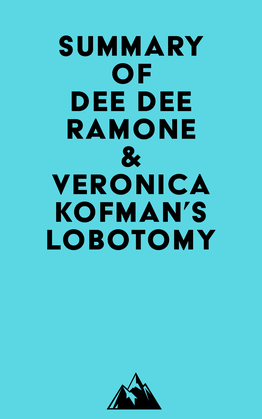 by   Everest Media (Author)
Buy for $3.99 Excerpt
Nonfiction Arts Music Punk
warning_amber
One or more licenses for this book have been acquired by your organisation details

#1 My mother was a showgirl dancer who met my father in Berlin in 1950. They fell in love and got married, but my father was thirty-eight years old and my mother was just seventeen when I was born. My mother had a restrictive life, even though Berlin was a big city with plenty of violent crime.

#2 My father was constantly fighting with my mother and me, and I had no self-esteem. I was afraid of my parents and afraid of school. I was a child child child.

#3 I liked everything that seemed rebellious. I would go to see the movie The Mummy with my mother, or The Ten Commandments on my own. The film was six hours long, so they had an intermission where they opened the exit doors so everyone could go outside and smoke a cigarette.

#4 I had to live in a fantasy world when I was in the army. The real world was too fucked up for me. I would go to the Minute Market and steal all the glue and model paint I could, then put the glue in a bag and sniff it.