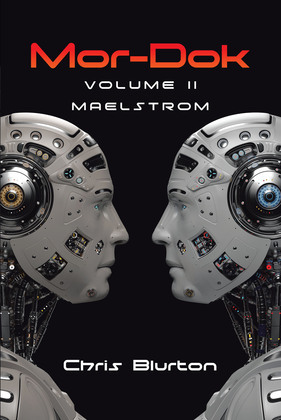 Volume II Maelstrom
by Blurton,Chris (Author)
Buy for $9.99 Excerpt
Fiction Science fiction Adventure
warning_amber
One or more licenses for this book have been acquired by your organisation details

The adventure continues with Mor-Dok Volume II: Maelstrom! Russian astronomers-turned-cosmonauts join forces with a mad scientist, oligarch, and sworn enemy to blast off aboard the Black Raven in search of the Mor-Dok. The newly assembled US space crew has been eagerly preparing to launch the Michelangelo and attempt to find the Mor-Dok also. Their plans take a sudden turn, however, when Johnny Conrad is alerted by the Mor-Dok that the Chinese spaceship White Tiger is under attack! Heart-pounding action, conflict, and danger surround the explorers as they take the fight to the Persticon! Jealousy, emotions, and betrayal threaten our heroes from within and can jeopardize everything. If the Mor-Dok cannot be saved and brought back to Earth, then all existence, and maybe the universe itself, will be lost. If that sounds exciting, just wait until you read the author’s bonus, alternate ending! It will have you thinking, “I didn’t see that coming. Mind blown!”