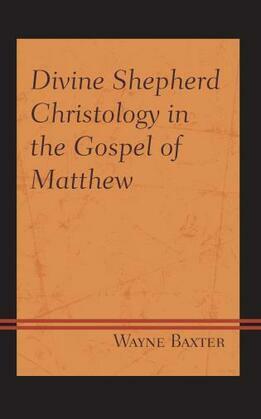 Divine Shepherd Christology in the Gospel of Matthew

In this book, Wayne Baxter explores and unpacks the Shepherd Christology in the Gospel of Matthew. By examining Matthew's shepherd motif against the backdrop of the metaphor's appropriation in the biblical tradition, in the writings of Second Temple Judaism, and in the New Testament, Baxter's analysis reveals important convergences and divergences between Matthew and these three groups of authors. One the one hand, the Evangelist's shepherd motif closely echoes that of the Jewish Scriptures; on the other hand, at points Matthew's motif aligns with the trope's usage by Christ-believers over and against its deployment by Second Temple Jewish authors. Sometimes he agrees with the Second Temple writers over and against Christ-believers, and at other times he stands alone, deviating from both Second Temple Jews and Christ-believers. Baxter argues that the reason for these convergences and divergences is Matthew's high Shepherd Christology: In Jesus the messianic Shepherd, YHWH has personally returned in a dramatic way to shepherd his people, Israel.