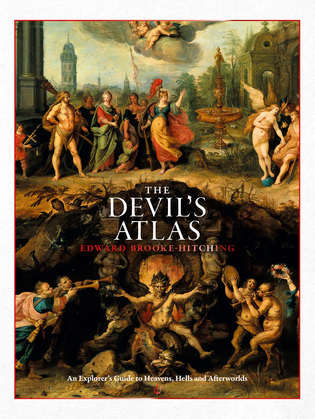 An Explorer's Guide to Heavens, Hells and Afterworlds
by Edward Brooke-Hitching (Author)
Buy for $13.99 Excerpt
Nonfiction Arts Reference Atlases History Other
warning_amber
One or more licenses for this book have been acquired by your organisation details

Packed with strange stories and spectacular illustrations, The Devil's Atlas leads you on an adventure through the afterlife, exploring the supernatural worlds of global cultures to form a fascinating traveler's guide quite unlike any other.

From the author of the critically acclaimed bestsellers The Phantom Atlas, The Sky Atlas, and The Madman's Library comes a unique and beautifully illustrated guide to the heavens, hells, and lands of the dead as imagined throughout history by cultures and religions around the world. Packed with colorful maps, paintings, and captivating stories, The Devil's Atlas is a compelling tour of the geography, history, and supernatural populations of the afterworlds of cultures around the globe. Whether it's the thirteen heavens of the Aztecs, the Chinese Taoist netherworld of "hungry ghosts," Islamic depictions of Paradise, or the mysteries of the Viking mirror world, each is conjured through astonishing images and a highly readable trove of surprising facts and narratives, stories of places you'd hope to go, and those you definitely would not. A traveler's guide to worlds unseen, here is a fascinating visual chronicle of our hopes, fears, and fantasies of what lies beyond.

DISCOVER THE BEYOND: From the depths of underworlds to the heights of heavens and everywhere else a life after death may be spent, this atlas explores the geography, history, and supernatural populations of the afterworlds of global mythologies.


A GLOBAL SURVEY: From the demon parliament of the ancient Maya, to the eternal globe-spanning quest to find the Earthly Paradise, to the "Hell of the Flaming Rooster" of Japanese Buddhist mythology (in which sinners are tormented by an enormous fire-breathing cockerel), The Devil's Atlas gathers together a wonderful variety of beliefs and representations of life after death.


UNUSUAL AND UNSEEN: These afterworlds are illustrated with an unprecedented collection of images. They range from the marvelous "infernal cartography" of the European Renaissance artists attempting to map the structured Hell described by Dante and the decorative Islamic depictions of Paradise to the various efforts to map the Garden of Eden and the spiritual vision paintings of nineteenth-century mediums.


EXPERT AUTHOR: Edward Brooke-Hitching is a master of taking visually–driven deep dives into unusual historical subjects, such as the maps of imaginary geography in The Phantom Atlas, ancient pathways through the stars in The Sky Atlas, and the literary oddities lining the metaphorical shelves of The Madman's Library.