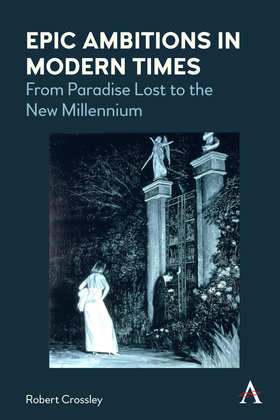 From Paradise Lost to the New Millennium
by Robert Crossley (Author)
Buy for $140.00 Read sample online Download sample
Nonfiction Literary essays
warning_amber
One or more licenses for this book have been acquired by your organisation details

Epic Ambitions in Modern Times joins an ongoing critical conversation about the persistence of the epic imagination. It has been written for an audience curious about the legacy of the ancient epics and the evolution of modern epic from its older prototypes. There are three interwoven premises in its twelve chapters ranging from Paradise Lost in the seventeenth century to the work of four feminist novelists in the twenty-first. One is that the epic impulse, the ambition to attempt the previously unattempted, never disappeared even after the vehicle of the long heroic poem came to seem old-fashioned or unrepeatable. Milton, far from annihilating future epics, left his fingerprints on the work of his successors. One subtheme of the book, inevitably, is the productive afterlife of Paradise Lost and Milton’s continuing relevance to an ongoing epic tradition. The second premise follows from the first: post-Miltonic epic is a mode of imagining that can take many forms other than the multi-book poem. The impulse to produce epic did not go extinct; it simply went underground after Milton and re-emerged in unexpected places. The epic imagination, so often waterlogged in bloated long poems, has flourished in a great variety of other forms and media: in novels, history-writing, drama and opera, film and music, painting, and fantasy and science fiction.

The third premise may perplex those who remember epic only as plodding translations of The Odyssey or unpronounceable excerpts from Paradise Lost imposed on unwilling high school students. Nevertheless, the third premise is that epic is a popular and populist kind of creation; not only do artists continue to aspire to epic, audiences still relish and even clamor for it. The most obvious cases for epic as popular art appear in the chapters on film, on Tolkien, and on twenty-first century feminist rewritings of the ancient epics. But nearly all the works discussed in this book were popular in their own day. Clarissa and The Decline and Fall of the Roman Empire were eighteenth-century best-sellers; Wagner’s Ring had an immediate vogue in his lifetime and tickets to performances remain prized in our own day. Jacob Lawrence’s 60 Migration paintings caused a sensation when they were exhibited in New York in the 1940s and the whole lot was snapped up by the Phillips Collection and the Museum of Modern Art. The popularity of Tolkien—author of the century, as Tom Shippey declared him—needs no elaboration. Kushner’s Angels in America and Madeline Miller’s recent novels derived from the Iliad and the Odyssey have been phenomena of popular culture.

This book explores the pleasures and challenges of the epic imagination, the persistent appeal of epic creation for artists and of epic experience for audiences, and the scope of epic achievements in the past three centuries. Artists working in many genres and media have challenged convention and embraced newness while remaining rooted in the oldest of literary forms. These are artists who, thinking and imagining big, have produced unexpected creations. They appeal to readers fascinated by the creative process, by originality and how it is achieved, and by what lies behind and looms above the often casual and commercial epithet of “epic.”

Epic Ambitions in Modern Times explores how artists in varied genres and media have aimed for, in Milton’s phrase, ”things unattempted yet” in epic creation. Starting with the last books of Paradise Lostas a farewell to the ancient tradition of epic and extending to an assessment of four twenty-first-century women writers retelling canonical epics in the voices of marginalized characters, the book’s intervening chapters consider epic in the forms of an epistolary novel, a work of history, a poetic autobiography, an opera, a silent film, a series of paintings, two literary fantasies, three poems set in the future and a play.