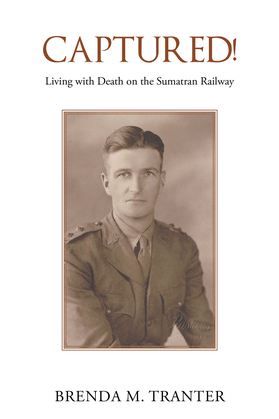 Living with Death on the Sumatran Railway
by Brenda M. Tranter (Author)
Buy for $3.99 Excerpt
Nonfiction Biography & autobiography History
warning_amber
One or more licenses for this book have been acquired by your organisation details

Australian Lieutenant, A.E. Tranter, from Heathcote, Victoria, (Australia) spends time in Malaya training young soldiers during the waiting period prior to WW2 in Asia. He survives the battle against the Japanese in Muar and the fall of Singapore, before escaping by boat to the wilds of Sumatra. However, his luck fails and he becomes one of the thousands of prisoners of war in the slave labour camps in Sumatra. He writes a tender book for his little daughter which he manages to keep hidden from the guards throughout his ordeal. Remarkably the book is all about the pleasant and beautiful things he has seen and learned in his enforced travel, even if witnessed from the heat and stench of locked box cars “ … in spite of the discomfort , we saw much that was interesting and beautiful”.

Despite this long ordeal, his writing conveys a message of tolerance, understanding and responsibility.

Tranter is amongst those put to work building a road through the jungle in Atjeh, then later, the second death railway - the Pakenbaroe/Moeara Railway, ironically completed on the day WW2 ended; never used and now forgotten in Australia by all but a few.

Here the Japanese and Koreans’ treatment of the prisoners becomes increasingly brutal with death and disease common, especially amongst “ the Romushas” - Asian enforced labourers - 80 000 of whom die. Meanwhile his little daughter is growing up in his hometown, under her mother’s care, both unaware of her father’s whereabouts.