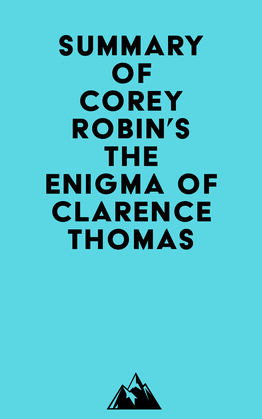 Summary of Corey Robin's The Enigma of Clarence Thomas

by   Everest Media (Author)
Buy for $3.99 Excerpt
Nonfiction Social science Discrimination & race relations
warning_amber
One or more licenses for this book have been acquired by your organisation details

#1 The classic American autobiography narrates a pilgrim’s progress, originating in chaos and ending in clarity. But for Clarence Thomas, his life story is more like an un-ironic Henry Adams, never reaching illumination and mastery.

#3 Thomas’s dislike of black liberals stems from the fact that he believes they are the product of light-skinned privilege. He believes that because light-skinned black elites have the skills and cultural capital to represent the race, they see themselves as the public face and natural leaders of the black community.

#4 After moving from rural Pin Point to urban Savannah, Thomas attended all-male Holy Cross in 1968, one of nineteen black men recruited by the legendary Father John Brooks. His peers were far more hostile towards him than he was towards them.