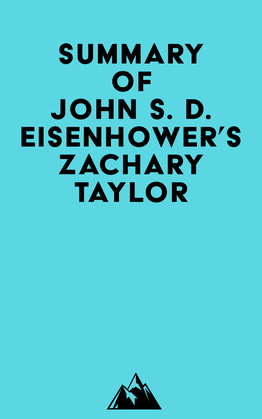 by   Everest Media (Author)
Buy for $3.99 Excerpt
Nonfiction History History by country United States
warning_amber
One or more licenses for this book have been acquired by your organisation details

#1 Zachary Taylor was a man who looked like a farmer, but was in fact a gentleman farmer. He was born in Virginia in 1784, but his family moved to Kentucky when he was young. He grew up in an environment where danger was accepted.

#2 Zachary Taylor was a planter who was first and foremost a soldier. He was not attracted to fancy uniforms or the parade ground, but he was a practical soldier who enjoyed soldiering.

#3 The situation at New Orleans was not conducive to inspiring a young man to remain in military life. The troops were suffering in the heat, and their commander was Brigadier General James Wilkinson, who was notorious for his greed.

#4 When he returned to duty, Taylor found himself in a different situation than when he had left New Orleans. The immediate crisis with Britain had passed, and the bulk of the army was now spread out across the western frontier, protecting civilian settlers against Indian attack.