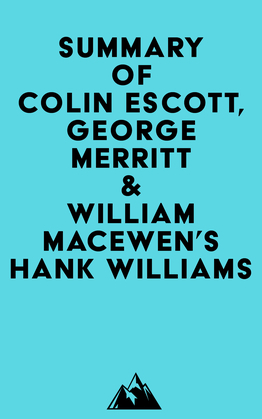 #1 The Mount of Olives, which overlooks Jerusalem from the east, will be the gathering place when the dead rise upon the Messiah’s return. Those buried on the Mount will be the first to rise, and will have pride of place at the Messiah’s side.

#2 Hank was his parents’ child in every respect. He had his mother’s driving ambition, but it was constantly subverted by his father’s tendency to backslide. When he was berated for his drinking, Hank would say, If you think I'm a drunk, you should have seen my old man.

#3 Hank was always drawn to music, as he knew from an early age that he wasn’t as physically strong as most kids. He grew up in a community with strong shared values, chief among them pride in physical strength.

#4 The first house the family lived in was a wooden shack on Highway 31, but it burned down a few months later. They moved into a house near the railroad tracks with the help of a man named Thaddeus B. Rose, who had a house free for them to rent.