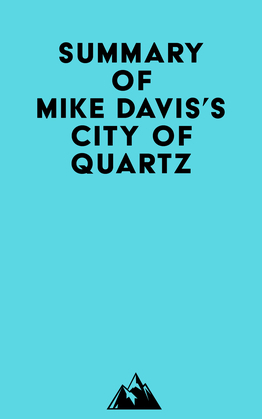 #1 To call Los Angeles an intellectual capital is to imply that it is fertile cultural soil that cannot produce any homegrown intellectuals. However, this is not entirely true. Los Angeles has become the world capital of an immense Culture Industry that has imported countless talented writers, filmmakers, artists, and visionaries.

#2 Los Angeles has been a site of both massive subordination of intellectuals to the programs of capital, as well as their sharpest critiques of the culture of late capitalism.

#3 The city of Los Angeles has been shaped by the migration of intellectuals, who have contributed to the creation and destruction of the city’s mythography. The so-called Arroyo Set created a comprehensive fiction of Southern California as the promised land of a millenarian Anglo-Saxon racial odyssey, while the post-war witch hunt decimated Hollywood progressives.