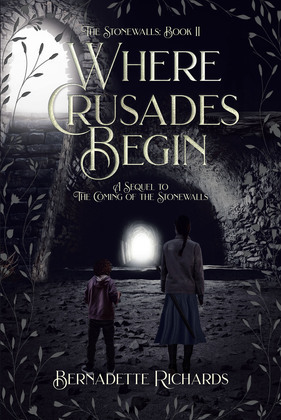 All was silent for several moments. Hank glanced up and saw that all the others were now gathered close by in excited fright, holding candles or standing in their encircling light. He took a deep breath and found that the smoke was already vanishing upon the chill air, making it clean and moist to breathe once again. The grass beneath him was wet and clammy, and he felt it seeping into the knees of his blue jeans as he knelt upon it. He glanced down and saw Mick lying flat on his back, gazing up into the dark sky with eyes that saw nothing but the memory of a blinding flash. Angus was beside him, resting a moment on hands and knees, to catch his trembling breath.

"Well, that was something," muttered Hank softly.

The story of the Stonewalls continues. Stonewall One's three cousins from Wisconsin are now to move in with the Brennans: CaseyJane, Angus, and Rusty Finn. It seems the glory of Stonewall life will only increase. Yet trouble already looms upon the horizon. The land of Isle Bri has not forgotten the Stonewalls, and they are not slow to begin a new attack. Angus, the middle of the three cousins, harbors a secret which none can explain. Rumor has it that Prince Liveyreveno has been discovered alive. Stonewall One shall find herself entering the mighty fortress of Sliaolc for the first time, in an attempt to rescue the youngest of her cousins from the scheming lieutenant Flint. Prince Liveyreveno's third officer, the sharpshooting Darowolf is soon to make his first acquaintance with the Stonewalls. But worse than even the outside troubles, there is a growing tension rearing its head among the Stonewall ranks, and none save a valiant few desire to have anything to do with the adventurous title of Stonewall, no matter where they are taken or sent.

And upon the doorstep, they have found a mysterious note from an old friend.