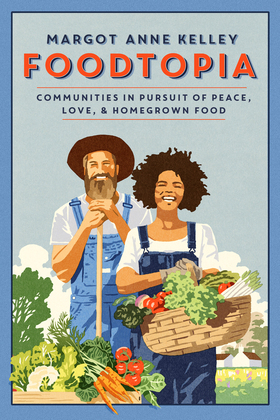 “Insightful...empathetic...a thoughtful consideration of a topic that will have a substantial impact on our future.”—Booklist

Ever wonder if there’s a better way to live, work, and eat? You’re not alone. Here is the story of five back-to-the-land movements, from 1840 to present day, when large numbers of utopian-minded people in the United States took action to establish small-scale farming as an alternative to mainstream agriculture. Then and now, it’s the story of people striving to live freely and fight injustice, to make the food on their table a little healthier, and to leave the planet less scarred than they found it.

Throughout America’s history as an industrial nation, sizable countercultural movements have chosen to forgo modern comforts in pursuit of a simpler life. In this illuminating alternative American history, Margot Anne Kelley details the evolution of food-centric utopian movements that were fueled by deep yearnings for unpolluted water and air, racial and gender equality, for peace, for a less consumerist lifestyle, for a sense of authenticity, for simplicity, for a healthy diet, and for a sustaining connection to the natural world.

Millennials who jettisoned cities for rural life form the core of America’s current back-to-the-land movement. These young farmers helped meet surges in supplies for food when COVID-19 ravaged lives and economies, and laid bare limitations in America’s industrial food supply chain. Their forebears were the utopians of the 1840s, including Thoreau and his fellow Transcendental friends who created Brook Farm and Fruitlands; the single taxers and “little landers” who created self-sufficient communities at the turn of the last century; Scott and Helen Nearing and others who decamped to the countryside during the Great Depression; and, of course, the hippie back-to-the-landers of the 1970s.

Today, food has become an important element of the social justice movement. Food is no longer just about what we eat, but about how our food is raised and who profits along the way. Kelley looks closely at the efforts of young farmers now growing heirloom pigs, culturally appropriate foods, and newly bred vegetables, along with others working in coalitions, advocacy groups, and educational programs to extend the reach of this era’s Good Food Movement.