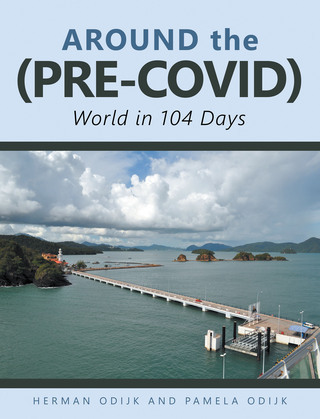 Around the (Pre-Covid) World in 104 Days

by Herman Odijk (Author), Pamela Odijk (Author)
Buy for $3.99 Excerpt
Nonfiction Travel
warning_amber
One or more licenses for this book have been acquired by your organisation details

My husband promised me the world – and on 21st May 2010, we left Sydney’s Darling Harbour on board Princess Cruises Dawn Princess to see it. (It was my 68th birthday!) The 104 days would take us to over 40 destinations on all continents and cover a total distance of 73,440 kilometres or 45,633.5 miles.

Prior to this I had only left Australia once – briefly. Herman however, had already spent some years at sea first in the Dutch Merchant Navy, and then in the Royal Dutch Navy and had visited many European and UK ports, and several in South America. On our world cruise he had the opportunity to revisit Curacao in the Netherlands Antilles where he was once posted. As well, members of Herman’s family came from Holland to see us at various ports.

Our world cruise preceded the world Covid pandemic which disrupted tourism and travel everywhere. So come with us through a different world, from Sydney and via the Suez Canal and return via the Panama Canal. Herman’s 450 plus photographs say it all, which is why the text is minimal. We have identified features and places together with some useful information. We leave readers to consult the ever accommodating, Mr. Google to provide any additional information.

Not all destinations in our 104-day cruise have been covered in this book. Some have been deliberately left out because they have been well covered in our previous books, i.e., Darwin which was included in our Around Australia’s Coastline: Plus, Norfolk Island, some Papua New Guinea & Lombok (Indonesia). Bloomington, IN, Balboa Press, 2021. Auckland, which was included in Around New Zealand in 14 Days. London, Austin Macauley, 2021. And several islands included in our book Around the Pacific, One Island at a Time, Bloomington, IN, Balboa Press, 2022, are excluded here. To cover them again would make this book unwieldy.

We also consider each cruise ship a destination in itself. When not touring, life on board is exceptionally interesting and entertaining, magnificent food and ambience, live theatre performances, movies, pre-dinner and lunch concerts, bands and orchestras and orchestral groups, talent quests, choirs and reviews presented by crew, guest entertainers, staff and talented passengers also entertain, art auctions, gyms, swimming pools etc. for the fitness fanatics, presentations from experts, and culinary and other classes, library, shops, casino and any number of games and events in which passengers can participate.
We hope you enjoy sharing our world cruise experiences and do make plans to enjoy some cruises yourself. PS. – That’s us on the back cover preparing to leave our motel and board the Princess Cruises Dawn Princess in Sydney’s Darling Harbour.