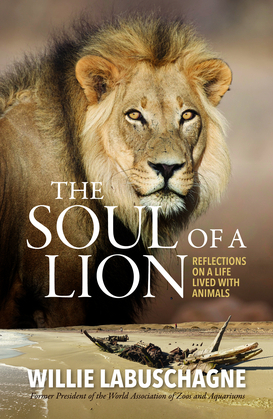 The Soul of a Lion

The Soul of a Lion, an engaging memoir by Willie Labuschagne, is an exhilarating journey which begins with the young conservationist’s unique experiences with wild animals. From his groundbreaking research on the desert cheetah’s behaviour and ecology to becoming an internationally respected consultant on environmental and wildlife-related issues, he holds the reader’s attention with all the skill of the master storyteller.

The numerous occasions when Willie faced potentially life-threatening situations with wild animals are vividly recounted, many of them wryly humorous while others evoke deep emotion.

But not all animal encounters took place in the wild. A significant and poignant encounter that further inspired Willie’s approach to conservation occurred when, during his time as director of the Johannesburg Zoo, he and his family hand-raised a newborn lion cub that had been rejected by its mother.

He recalls the countless obstacles put in his way by the bureaucratic nature of his own species during his tenure at the zoo. But despite numerous challenges he persisted in his goal of transforming and improving zoological institutions. A driving force behind the changing nature of professionally managed zoological gardens, Willie’s book reminds us that, while many of the world’s zoos should be unconditionally closed, progressive modern zoos are becoming increasingly aligned to wildlife conservation: they are vital for ensuring the survival of threatened species.

Willie shares his entertaining and often moving life experiences with warmth and understanding, whether it is sleeping under the stars with the bushmen of the Kgalagadi desert or observing the traditions of the Zulu Royal House. His travels in the African landscape in particular are an exciting panorama of many distinctive habitats, from the relentless desert of the Skeleton Coast in Namibia to the pristine beauty of the Tsitsikamma Forest and the breathtaking vastness of the African bushveld.

Importantly, he is forthright in his view of the critical position of the world we live in and the future it holds for mankind and believes that we are all part of a custodianship which should do everything in its power to protect our fragile environment.

Willie Labuschagne, a man with the soul of a lion, is a dedicated and internationally celebrated wildlife conservationist who holds a master’s degree in wildlife management. For more than five decades he has been actively involved in the conservation of threatened species for which he has received national and international recognition, culminating in numerous awards.