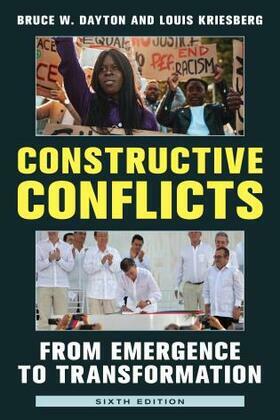 Substantially revised for the sixth edition, Constructive Conflicts explains how large-scale political and social conflicts can be waged more constructively, with more positive consequences and fewer destructive consequences for those involved. Drawing on research from political science, sociology, social-psychology, neuroscience, cultural studies, and other disciplines, Dayton and Kriesberg follow the lifecycle of social and political conflicts as they emerge, escalate, de-escalate, become settled, and often emerge again in new forms.

The sixth edition presents numerous new examples and cases of conflict episodes that have avoided extreme coercion or violence and which have resulted in the advancement of the interests of most parties involved. The book gives policymakers, concerned citizens, and students a powerful analytical framework, supported by data, for understanding and constructively intervening in conflicts of different type and scale, offering a way out of the destructive cycles of conflict management which have come to characterize contemporary social and political relations.

Key revisions and features include: