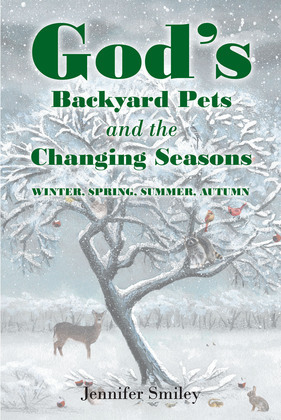 Winter, Spring, Summer, Autumn
by Smiley,Jennifer (Author)
Buy for $9.99 Download sample
Nonfiction Nature, recreation and sports Nature Wild animals
warning_amber
One or more licenses for this book have been acquired by your organisation details

In 2007, the author took over the complete care and feeding of the birds, squirrels, and chipmunks. In about 2004, she had inherited the care and feeding from her mother who had broken her hip and then became sick with heart problems. When her mother passed away in 2007, there was not much there in the way of backyard pets, but over the years, it became built up and quite nice.

The author bought a digital camera in 2010, which made the possibility of winter, spring, summer, and autumn photographs possible.

The author already owned the rabbit, mice, and hamsters back in 2004, and they are always included in her writings of God's backyard pets. Occasionally, we go out and about the neighborhood for it is quite scenic and describe other places such as Mary's Pond, Leonard's Pond, and the scenic trail at Fairhaven for Budgie, the author's bunny always came along for walks or bicycle rides or kayak rafting and so too the mice and the hamsters.

The seasons play a large part in the lives of the pets, and we have faithfully marked every winter, spring, summer, and autumn. Being so close to the land and to the water and what's going on with the pets, it's only natural to feel the joys and woes of every season. See the wonder of the squirrels, chipmunks, birds, mice, hamsters, and bunnies though the miracle of each season. Follow the joy of Christmas, Easter, and Thanksgiving through the eyes of God and the author.

These writings are specifically from 2015 to 2019. The author did not start with the intention of marking every season and holiday. It just evolved naturally from wanting to further document the backyard lives of their pets. And to do so, in a way that would make a difference.

This book is dedicated to Budgie, the author's number one pet, and for whom she took on the project of the backyard pets in the first place. She always did believe. Whether a dozen pets or one pet, we have enjoyed every minute of it!