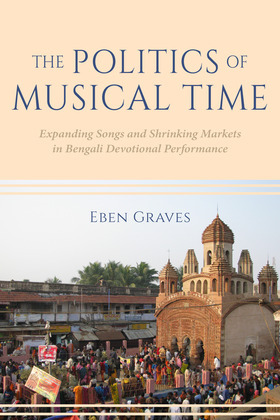 The Politics of Musical Time

How do the temporal features of sacred music affect social life in South Asia? Due to new time constraints in commercial contexts, devotional musicians in Bengal have adapted longstanding features of musical time linked with religious practice to promote their own musical careers.

The Politics of Musical Time traces a lineage of singers performing a Hindu devotional song known as kīrtan in the Bengal region of India over the past century to demonstrate the shifting meanings and practices of devotional performance. Focusing on padābalī kīrtan, a type of devotional sung poetry that uses long-duration forms and combines song and storytelling, Eben Graves examines how expressions of religious affect and political belonging linked with the genre become strained in contemporary, shortened performance time frames. To illustrate the political economy of performance in South Asia, Graves also explores how religious performances and texts interact with issues of nationalism, gender, and economic exchange.

Combining ethnography, history, and performance analysis, including videos from the author's fieldwork, The Politics of Musical Time reveals how ideas about the sacred and the modern have been expressed and contested through features of musical time found in devotional performance.