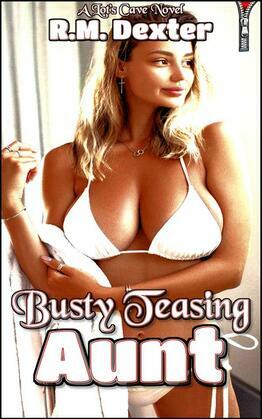 by R.M. Dexter (Author)
Buy for €3.99
Fiction Erotica Romance Adult
warning_amber
One or more licenses for this book have been acquired by your organisation details

38-year-old Tara has a thing for her young nephew, Logan. While staying over while her sister is out of town, Tara decides to have some fun by dressing provocatively for Logan and two of his friends. Tara thought her actions were simply sweet and innocent, but were they? The boys saw it otherwise, and made sure Tara paid the price her teasing nature.

“You said you wanted to play a game, or something.” Logan paused and nodded towards his two friends behind him. “Well, Aunt Tara, we’ve chosen the ‘or something’.”

There was something about the way her nephew said that, and the look in his eyes, that made the hair on the back of Tara’s neck stand up.

“What, what do you mean?” Tara asked, alarm bells starting to go off in her head.

Logan quietly turned and looked over his shoulder. “Close the door, Wyatt.”

With her heart starting to beat faster, Tara watched as Wyatt closed the door and returned to his spot behind Logan. Tara looked at all three of them, seeing the hungry look on their faces as they blatantly ran their eyes over her.

“You know,” Logan said as he slowly stepped forwards, the other two following right behind, “it really wasn’t very nice of you to tease us like that all day.”

“What…I…I don’t know what you mean,” Tara said as she instinctively took a step backwards as they moved towards her.

“We’re not stupid, Aunt Tara,” Logan said, his voice more calm and assured than Tara had ever heard before. “It’s obvious you enjoyed the attention. But I don’t blame you. A beautiful woman like you, 38 years old, no doubt in her sexual prime, and without a boyfriend for quite some time now. It’s natural that you’d like it when young men pay attention to you, to prove to you that you’re beautiful and desirable. Like I said, it’s natural that you need that to make you feel good.”

Logan paused and Tara stood there, her heart beating wildly as he slowly ran his eyes up and down her body, taking his time as his eyes settled on her heaving chest.

“Yes,” Logan continued, “with those long beautiful legs of yours, you have a killer body that you’ve loved showing off to us today. And the fact that you’ve got the face of an angel makes you even more worthy of the attention. But I don’t think it’s just the attention you need.”

“What…I…I…Logan, I don’t know what you’re talking about,” Tara said as she took in the eager look in the eyes of all three boys.

“Oh, I think you do,” Logan said, the confident tone in his voice scaring Tara. “I think part of you needs that attention, but I don’t think that’s all you need.”

Tara was trembling now, backed up against the wall as the boys closed in on her. “No, no…you’re wrong about all this. Like I said…I…I don’t know what you mean.”

“Sure you do,” Logan said with a carefree shrug of his shoulders. “We all saw the way you acted today, with those outfits you wore. It’s obvious to all three of us, and to you too, once you admit it to yourself.” Logan paused for a second, his dark eyes peering at Tara intently. “It’s not just the attention you need and crave, Aunt Tara.”

As soon as he said that, all three boys started moving in on Tara.