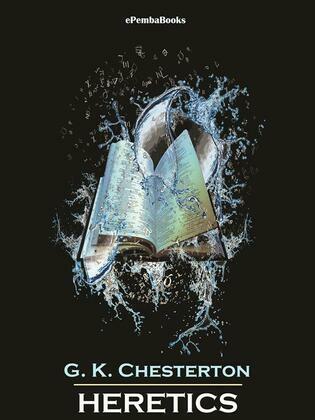 First published in 1905, “Heretics” is a collection of 20 essays and articles by English writer and philosopher G. K. Chesterton.

Focusing on "heretics" — those who pride themselves on their superiority to Christian views — Chesterton appraises prominent figures who fall into that category from the literary and art worlds. Luminaries such as Rudyard Kipling, George Bernard Shaw, H. G. Wells, and James McNeill Whistler come under the author's scrutiny, where they meet with equal measures of his characteristic wisdom and good humour.

In addition to incisive assessments of well-known individuals, these essays contain observations on the wider world. While the loci of the chapters of “Heretics” are personalities, the topics he debates are as universal to the "vague moderns" of the 21st century as they were to those of the 20th. The topics he touches upon range from cosmology to anthropology to soteriology and he argues against French nihilism, German humanism, English utilitarianism, the syncretism of "the vague modern", Social Darwinism, eugenics and the arrogance and misanthropy of the European intelligentsia.

“Heretics” roused the ire of some critics for censuring contemporary philosophies without providing alternatives; the author responded a few years later with a companion volume, “Orthodoxy.” Both works are regarded as central to his corpus of moral theology.
Format
EPUB
Protection
DRM Free
Publication date
August 18, 2022
Publisher
ePembaBooks
ISBN
9791221387285
File size
1.19 MB
The publisher has not provided information about accessibility.
4736767
item