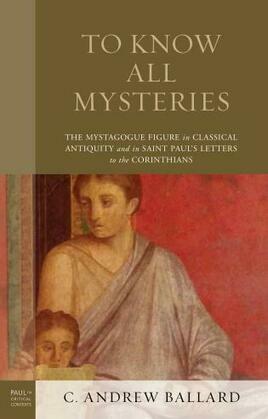 To Know All Mysteries

This book examines the way that Paul presents himself as a guide into mysteries, a “mystagogue,” in 1–2 Corinthians. By describing himself as a type of mystagogue for the community, Paul was following a precedent in both Jewish and non-Jewish sources for invoking mystagogic language to engage in polemics with a rival. In opposition to the precedent, however, Paul understands the mystagogue to be a bi-partite figure—comprised of both foolishness and wisdom simultaneously. C. Andrew Ballard argues that ancient mystagogues were often described in two disparate ways: figures of power, and figures of weakness and foolishness. Paul synthesizes both aspects of the mystagogue in his self-presentation to the Corinthians. The figure of the mystagogue, as a wise-fool, was useful to Paul because it was descriptive not only of his own experience as a suffering yet authoritative apostle, but also of the experience of his deity, the suffering and glorified Christ. By presenting himself as both a powerful and foolish mystagogue, Paul could argue that he was a more authentic imitator of Christ than his opponents in Corinth, who boasted in self-exaltation instead of self-humility. In this way, Paul used the character of the mystagogue as a strategic rhetorical tool in his communication with the Corinthians.