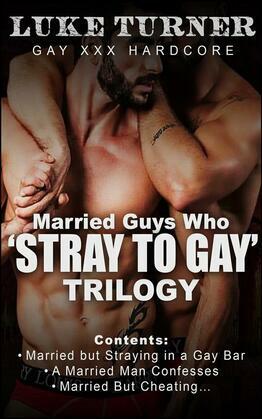 by Luke Turner (Author)
Buy for €9.99
Fiction Erotica Romance Adult
warning_amber
One or more licenses for this book have been acquired by your organisation details

Frank has had another big bust up with his domineering wife, gets locked out the house and decides to go to a different part of town to be alone, find a bar and drown his sorrows. That’s where he meets Logan; a man about town type of guy out on the loose and looking for a bit of fresh for the night. The offer is made, and after a few beers too many, Frank nervously accepts and goes back to Logan’s apartment. Should he or shouldn’t he?

Normally, I would have gone to a friend's house and crashed on his couch, drank a few beers and ranted about how complicated women could be, but my best friend just happened to be out of town that weekend, of all weekend's to be gone, so I was left with nowhere to go and no one to moan at. That's probably how I ended up sitting in that dirty little bar down on Second Street, surrounded by people who had nothing better to do on a Friday than booze their cares away.

I took a seat near the end of the bar, away from the crowds, wanting to drink myself into a stupor, ignore everyone around me and be ignored except for the bartender who occasionally swung my way to give me another drink.

Back in college, when I'd been much more of a drinker, during those rough patches with my wife who was just my girlfriend back then, I would sometimes find myself in a dump like this filled with people looking for a quick hookup; I was the same, and I wasn’t too choosy who I ended up with either. A guy was as good as a girl, and my wife never got to know. I never felt guilty about it either. But since then, since my college days, I hadn't repeated any of that stuff again, the one night pickups, I mean.

I didn't have any intention to that night either until a guy slid onto the stool next to mine and ordered a drink from the bartender. I ignored him for a few minutes, crunching peanuts in my hands and sweeping the crumbs into a neat pile on the bar top. I would have been happy enough to ignore him all night and just get slowly drunk if he hadn't looked at me making a mess with the nuts and said, "You're supposed to eat those, not play with them."

It was a simple enough thing to say, just pleasant bar talk, something anyone probably would have said to get a conversation going, but considering my wife had just kicked me out and my only plan for the night was to sleep on the street or in the park, I wasn't in the mood to joke around.

"Go ahead and eat them then," I replied without even glancing his way, “Help yourself.”

He paused, probably thinking I was just another morbid Friday night drunk, but then I saw his hand sneak over and grab a peanut from the pile. He had a tattoo circling round his middle finger, tiny words that I couldn't make out. That was enough to grab my attention and bring my face up to look at him, at his boyish face, his dark hair framing his brown eyes as he returned my look. He had more tattoos on his neck, disappearing under the collar of his shirt. I was staring.

"What's wrong?" he asked, throwing the peanut up in the air and catching it in his mouth, cool and easy, as if he did this all the time, and maybe he did. Maybe it was his party trick. "Like it?"

"No." I shook my head and looked away. I wasn’t impressed with his tricks.

"Bad night?" he asked, reaching for another peanut from the pile. Fine. I wasn't going to eat them anyway. Someone might as well.