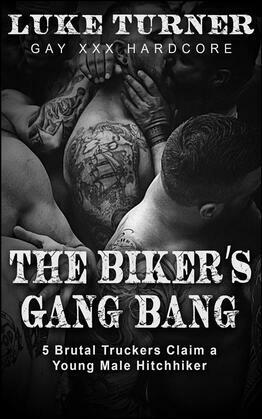 by Luke Turner (Author)
Buy for €3.99
Fiction Erotica Romance Adult
warning_amber
One or more licenses for this book have been acquired by your organisation details

5 Brutal Truckers Claim A Young Male Hitchhiker. Simon is a college student, a hitch hiker, who gets picked up by Yosser, one of a gang of truck drivers who prey on guys like him, offering them lifts, buying them food and then hooking them into their world of sleazy, cheap motel room, degrading sex. Dominating and submissive; solo, group and gang banging,this is rough play at its nastiest and guaranteed to please! Like it raw and randy? So do these guys.

Simon had tried to talk his way out of it at first, thinking that these guys would be too much to cope with; just him and five of them. But now he couldn’t get enough. He was sure they’d have to move on sooner or later, but in the meantime he’d figured it would be best for him to do what they wanted him to do, enjoy it while he could, and then wait till next time.

Back at College he was ‘Simon the Dude’ the good looking guy who all the older faggots made passes at. Now he was ‘the cub’ the good looking guy on his hands and knees who all these greaseball truckers took advantage of. It was sick, dirty and cheap and he loved it. A good looking twenty year old with a stressful career in banking ahead of him needed something like this; being used as a faggot for this bunch of greasy shit heads. He had to get this urge out of his system before he started his career, did the whole ‘respectful’ thing and generally acted like Mr. Normal, married with kids and a house to be paid for over the next twenty five years.