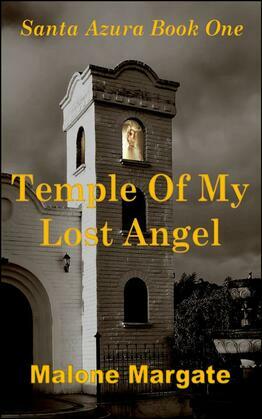 Temple Of My Lost Angel

Santa Azura No.1
by Malone Margate (Author)
Buy for €5.99
Fiction Erotica Romance Adult
warning_amber
One or more licenses for this book have been acquired by your organisation details

A young man finds the love he lost through a group sex intervention. Part one in a series that will explore the journey of a young man to a world that previously only existed in his imagination, a world where a sex-starved succubus becomes his willing bride. An angel who needs to feed on his sex and the love and lust of their friends.

To fully appreciate the flavor of a meal, aroma plays an essential part, interacting and merging with the signals from one’s taste buds before jointly marching into one’s brain as a unified force. My sinuses, acting as advanced scouts, inhaled slowly and deeply, processing and recording the intense musk of her natural nectar. A finely aged libation that had been percolating and fermenting inside her virgin vagina until I could sample her salty nectar before any other man. The intense odorous scent of her fermented sex eating away at my brain enraged my lust monster to a previously unknown level of intensity. Yet, the word “Honey” echoed in the back of my mind.

Roaring at, then trying to beat the gentler side of me into submission, the sexual animal I had kept caged my entire life broke free, demanding I ravage Cynthia’s cunt immediately and intensely.

I stopped it, holding back the sex-crazed monster inside me as a lion tamer might, wanting to savor and remember the first time I tasted Cynthia’s sex before allowing the Mr. Hyde to my Dr. Jekyll to be unleashed upon her.

My lips kissed her silky inner lips, and I relaxed my neck, which allowed her hands (clawing at the top of my head) to drive my mouth into the valleys between her lower lips, where I sucked her frictionless inner folds of flesh into my mouth. Her arms and hands tried to force my head inside her body, and her legs overpowered my arms, encasing the sides of my head in her fleshy thighs. My hands were trapped next to my face, and I pressed a finger from each deep into her squishy flesh to create an airway so I could breathe as I proceeded with my oral examination of her femininity.

The feeling of her silky, almost frictionless folds of female flesh between my lips confused my tongue; it knew there was something there but could not draw whatever it was deeper into my mouth for further study. Every attempt the tip of my tongue made to explore her slippery folds slithered away.

Shifting the aim of my mouth slightly, I instructed my probing taster to seek out the magic button my fingers had found earlier, the hidden treasure below mount clitoris. When the tip of my tongue found the hard button I blindly sought out, her thighs spasmed, tightening their grip around my head, rolling her entire body over to one side, taking my head, neck, and the rest of me with her.

My tongue slipped during the unexpected maneuver, sliding inside her cunt for the first time. Then, probing as deep as possible, I felt a hot vacuum from within her body, sucking on my tongue’s penetration. It was as if I was French kissing the fiery depths of frictionless space, and her pussy was trying to pull me inside her body tongue first.

She rolled over onto her back again, grinding my nose to her clit as my pussynaut stretched to its umbilical limits, struggling and straining to explore the depths of the silky, slimy, inflamed void between her legs.